Ukrainian soldiers launch a shell toward Russian forces in recently liberated Kupyansk in the Kharkiv region on September 22.

Britain's Defense Ministry says Ukrainian forces have secured bridgeheads on the eastern bank of the Oskil River in the eastern part of the Kharkiv region, where Russian forces had attempted to establish a consolidated defense line following their hasty withdrawals in the face of the Ukrainian offensive.

RFE/RL's Live Briefing gives you all of the latest developments on Russia's ongoing invasion, Kyiv's counteroffensive, Western military aid, global reaction, Russian protests, and the plight of civilians . For all of RFE/RL's coverage of the war, click here .

The Oskil flows south to the Siverskiy Donets River, which bisects the Luhansk region that along with Donetsk composes what's known as the Donbas.

The ministry said in its daily intelligence bulletin on September 23 that the battlefield situation remained complex in eastern Ukraine but that Ukrainian forces were now putting pressure on areas that Russia "considers essential to its war aims."
Meanwhile, the General Staff of the Armed Forces of Ukraine reported in its morning briefing on September 23 that a Russian major general was wounded near Svatovoy in the Luhansk region.
"The enemy continues to suffer losses, in particular among its leadership," the General Staff said in a statement. "According to currently available information, the commander of the 144th Motorized Rifle Division of the 20th Combined Arms Army, Major General Oleg Tsokov, was wounded as a result of fire in the area of the settlement of Svatove," the statement said. The Ukrainian military said the Russian occupiers are forcibly mobilizing men from the territories under its control "to replenish losses in manpower." Russian President Vladimir Putin announced a partial military mobilization on September 21 amid apparent heavy personnel losses in the unprovoked invasion of Ukraine that Moscow started in February.

Ukraine's General Staff said that, as of September 22, Russian forces have lost about 55,510 soldiers in the war. Defense Minister Sergei Shoigu on September 21 said that Russia had lost 5,937 soldiers since the start of the war. Neither figure could be independently confirmed. 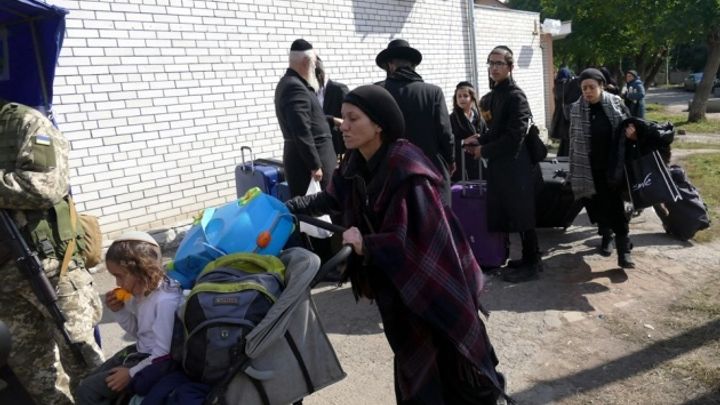 The religious events on the occasion of the Jewish New Year, Rosh Hashanah, have ended in the city of Uman, and Hasidic pilgrims are starting to leave Ukraine.

War will end only after complete de-occupation of entire Ukraine’s territory – Zelensky.

Ukraine must return all its temporarily occupied territories and only then it will be possible to talk about the end of the war.

President of Ukraine Volodymyr Zelensky believes that even long Russian occupation cannot break the morale of brave and united Ukrainians.

Arbitration to take place regardless of Gazprom's participation in it – head of Naftogaz Ukrainy.

A gas transportation agreement between NJSC Naftogaz Ukrainy and JSC Gazprom takes into account the right of the Ukrainian company to apply to arbitration in case of disputes, head of Naftogaz Ukrainy Yuriy Vitrenko recalled.

A total of 6,326 Ukrainian children have been found since the Russian invasion started.

Children among 13 dead as gunman opens fire at Russian school.

A gunman has opened fire at a school in central Russia, killing at least 13 people and injuring 20. The victims include seven children at the school in the city of Izhevsk. #skynews #russia SUBSCRIBE to our YouTube channel for more videos: Follow ...

Hurricane Ian intensifies as it barrels toward Florida.

The storm intensified into a hurricane Monday morning as it moves toward the state, as nearly every county remains under a state of emergency. #FoxNews Subscribe to Fox News! Watch more Fox News Video: Watch Fox News Channel Live: FOX News Channel...

Why a state funeral for ex-PM Abe has sparked protests in Japan - DW News.

Japanese Prime Minister Fumio Kishida’s decision to hold a state funeral for former leader Shinzo Abe has led to opposition and protests. Abe, Japan’s longest serving Prime Minister, was assassinated in July and will be given a rare state funeral ...