In this Aug. 7, 2018 photo, a doctor performs an ultrasound scan on a pregnant woman.

An appeals court in Florida has upheld a decision by a circuit judge to block a “parentless” 16-year-old from having an abortion, ruling she is not “mature” enough to end a pregnancy.

The teen was seeking a court waiver to terminate her pregnancy, meaning she wanted to be able to have the procedure done without the written consent of a parent or guardian. Circuit Court Judge Jennifer J. Frydrychowicz, a registered Republican, first denied the bypass, reports CBS News, and three judges of the First District Court of Appeal denied her appeal.

In the ruling, the court decided she did not present “clear and convincing evidence that she was sufficiently mature to decide whether to terminate her pregnancy.”

The ruling, which was published online, also said that while the teen has no parents, she does have a legal guardian. She is currently pursuing her GED and participating in a program for young women “who have experienced trauma in their lives by providing educational support and counseling.”

In her petition to obtain an abortion, the girl argued that she “is not ready to have a baby,” doesn’t have a job, is “still in school,” and that the father is unable to assist her, reports NBC News.

According to Fox8, the pregnant girl said in her petition that her appointed guardian “is fine with what she wants to do.”

The appeals court said if that guardian “consents to the minor’s termination of her pregnancy, all that is required is a written waiver from the guardian.”

The appeals court also wrote that it appeared the trial court wanted to give the teen “additional time” to consider her decision.

“Reading between the lines, it appears that the trial court wanted to give the minor, who was under extra stress due to a friend’s death, additional time to express a keener understanding of the consequences of terminating a pregnancy,” the judges ruled. “This makes some sense given that the minor, at least at one point, says she was open to having a child, but later changed her view after considering her inability to care for a child in her current station in life.”

One of the ruling judges, Scott Makar, wrote that he only partially concurred with the ruling from the other two judges.

In the court’s decision, he wrote that the teen had displayed maturity and noted that she explained that she’s “not ready to have a baby.”

He also noted that Frydrychowicz had left her decision open-ended, with the potential for the teen to ask for a bypass “at a later date.”

“Given the open-ended nature of the order reflecting the trial judge’s willingness to hear from the minor again – and the time pressures presented – I would remand the case to the trial court,” Makar wrote.

The other two judges, Harvey L. Jay III and Rachel E. Nordby, ruled that sending the case back to the trial court was not necessary.

News of the ruling spread quickly, with many politicians questioning the court’s decision.

Florida senate minority leader Lauren Book said it was “unconscionable” to sentence the girl “to continue an unwanted pregnancy after she stated she was not ready to have a baby, was pursuing her education, didn’t have a job, and the father was unable to assist her.”

It’s unconscionable for the State of FL to sentence a “parentless” 17-yr-old girl to continue an unwanted pregnancy after she stated she was not ready to have a baby, was pursuing her education, didn’t have a job, & the father was unable to assist her 1/ https://t.co/oIiyhlz7tq

Congresswoman Diana DeGette asked: “But she’s mature enough to raise a child instead?”

NEW: A Florida court is blocking a 16-year-old from having an abortion because it says she's not "mature" enough to make that decision.

But she's mature enough to raise a child instead?

This is outrageous. And it's why we must stop this extreme GOP agenda immediately! https://t.co/2t9bpOvmNq

If the teen decides to take her case back to trial court, however, she may be running out of time. At her previous appearance in trial court earlier this month, the judge determined she was approximately 10 weeks along in her pregnancy. In April, Florida Gov. Ron DeSantis signed into law legislation that bans abortion after 15 weeks. 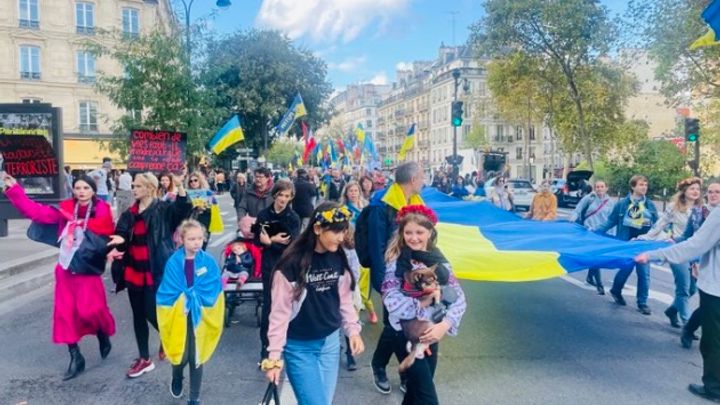 March in support of Ukraine held in Paris

In Paris, Ukrainians held on Saturday a large rally in support of Ukraine and against Russian aggression.

The Minister of Foreign Affairs of Latvia, Edgars Rinkevičs, believes that the use of tactical nuclear weapons by Russia cannot be ruled out, however, the Kremlin realizes that this will become a "point of no return" for them, so this is primarily...

France is preparing to deliver a new batch of Caesar self-propelled howitzers to Ukraine.

The situation in the southern operational zone remains difficult but controlled by Ukraine’s Defense Forces.

Hundred’s join in solidarity for Iran’s Mahsa Amini in Kelowna.

The aim of the rally in Kelowna was to be another voice for the people of Iran and continue to fight for justice for Mahsa Amini and all Iranians.

Why the Russians might use nuclear weapons - Ben Domenech Podcast.

On this episode, Ben sits down with Rebeccah Heinrichs, a Senior Fellow at Hudson Institute specializing in US national defense policy with a focus on strategic deterrence. Ben and Rebecca address the question of whether Russian President Vladimir...

A Florida Keys family rescued a baby turtle from debris as a result of Hurricane Ian. The family gave the turtle over to an animal hospital that will release him back into the wild. » Subscribe to NBC News: » Watch more NBC video: NBC News Digital...

Tucker Carlson: Why didn’t we know about this? #shorts.

Joel Klatt: This will change the landscape of College Football - Will Cain Podcast.

Then, Will sits down with FOX Sports’ lead college football game analyst, Joel Klatt, to discuss his hit new podcast, The Joel Klatt Show: A College Football Podcast, and why he is on a mission to be the fairest voice in the game of college footba...

On this episode, Will sits down with Former Deputy National Security Advisor of the United States K.T. McFarland to discuss why she believes the Russians are responsible for the sabotaging of the Nordstream pipeline, and what it means for the war ...

What role do media, government and citizens play in disaster response?.